Billed as one of the biggest/best electronic music festivals in London, I had high-hopes for this – I’ve never been previously but lots of people I know had been in the past and said it’s a great event, so was looking forward to it, also being the final festival of the Summer for me too.

The location couldn’t be better – no longer than a 15/20min walk through the Common, from Clapham Common/Clapham North stations, and lots of pubs/bars around there for meeting-up/pre-drinks, it was ideal. The queues on both days weren’t quick, but not too long either, as on Sunday (the biggest of the two days) we had to queue for about 30mins, but it wasn’t a big deal. Security checks/bag checks were really thorough and quick too – which is always a challenge with so many people at a London festival.

It’s pretty big in terms of space – similar to when Lovebox used to be at Victoria Park – where, as you enter, the main stage is at the very back far-right, and smaller stages were dotted around. All the stages were inside tents – which was great considering the downpour of rain on Sunday – and made the sound that little bit better, though, it did feel very crammed at times, as almost every stage we went to had very little room to move. It didn’t bother me too much, but does get a little annoying over the coming hours (as well as trying to find your friends too!) The sounds from all the stages I went to were great too – bass and treble all really strong and no ‘humming’ – whilst DJ EZ was playing on one of the stages, the big screen behind him showed his hands on the decks working in quick motion and lighting, etc all made it really cool and quite memorable, as well all the stages had vibrant electronic screens which definitely gave the festival a big feeling to it.

Dotted around the festival site were all the Bar areas with, at the center, all the food stalls with a variety of food – quite expensive (to be expected at festivals nowadays!) but all pretty good. Having it at the center was a good idea too as it also had space for us to sit and take some time to eat/meet up, and didn’t get in the way of people walking around/to other stages.

Biggest let-down however were the queues at the Bar stalls – no matter what day, time or bar area we were at – it took quite a long time to get a drink, same could be said for the Food stalls too. Queues on these went on for about 45mins or so. I felt there simply just weren’t enough staff in the tents to serve people, and they had some pretty poor equipment in terms of payment (some contactless payments weren’t going through, in some cases, so people had to keep re-tapping their cards on the reader, and then long pauses until the transactions were approved) and a lot of antsy people waiting in the queues didn’t help either. It was a common complaint, when checking the comments on Twitter afterwards, which was a shame.

In terms of performances – I found them to be a bit hit-and-miss, especially on the first day (Saturday) which was headlined by Marshmello – I’ll be honest and had no idea who he was (we had to Google him on site) and, whilst I would be welcoming to listening to new acts – his crazy mix of EDM/techno, quick cuts and random BPMs just didn’t do it for us – it looked like people around us felt the same way too, it felt underwhelming and too much on flashing lights/lazers. Same could be said with some of the other performances on the main stage that day too, otherwise the main highlight for us was Idris Elba doing a set featuring lots of old Dance tracks, mixed in with some ones, but otherwise we left on Saturday feeling slightly underwhelmed. 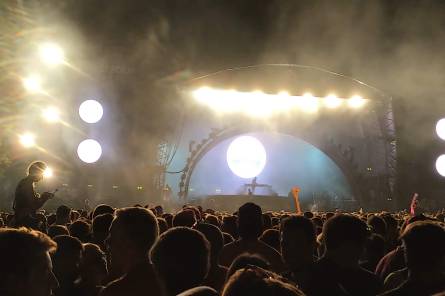 That all changed come Sunday – Craig David with an old-school RnB set (like it was 2000 all over again), Sam Divine, DJ EZ, Basement Jaxx and Chase & Status’ main headline made up for it all and was really worth it in the end – and came out thinking that maybe next year we’ll opt for the second day.

The main Exit is a bit of a walk from the main Stage, given that it’s at the Entrance to when you come in, whilst there wasn’t multiple Exits like most places, it wasn’t rammed too much and the Common spreads to different directions, which is handy to either head to Clapham Junction, the High Street or further south (where had a few drinks to end the night in many directions!) – also plenty of buses running around that time made it easy, no matter which direction you needed to go. On Sunday I made it back to Shepherd’s Bush in less than an hour (in contrast to Lovebox, which had queues to get into the Tube stations, which wasn’t ideal!) which I think was a big plus point for SW4

Overall, a great Festival and I would recommend going again next year, but likely only on the Sunday, pending the line-up and comments from the Saturday before, and it’s still a really good, local alternative to the likes of Creamfields, etc that normally go on that weekend too, given the transport links there and back are really good.